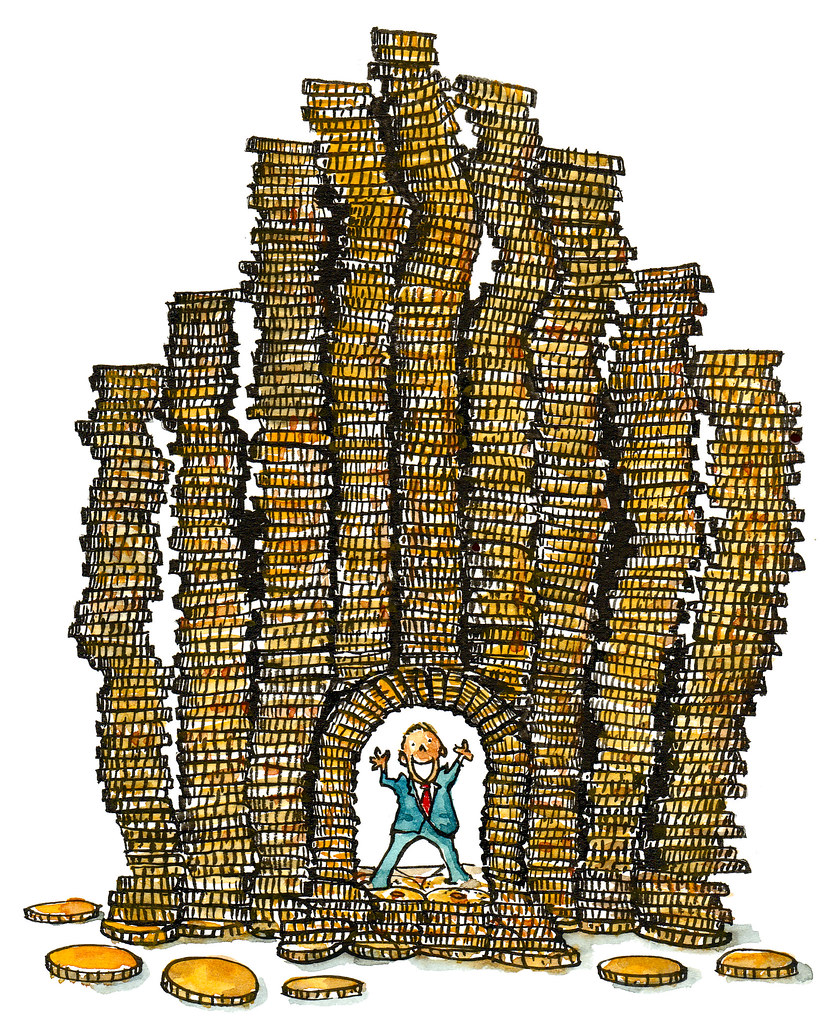 Today I was thinking about financial security and recognized that somehow I felt a little uncomfortable with the term. This surprised me because logically it makes a lot of sense to me and obviously everyone can benefit from financial security in all kinds of ways.
However, every time I said ‘financial security’ to myself, I felt a slight twinge of stress in my shoulders and over the years I have learned that this kind of message from our somatic mind, or body or unconscious or whatever you want to call it, is generally worth listening to.
So I started playing with some metaphors and images in my mind and the word ‘security’ immediately brought up the image of a castle protected by a moat, a great gate and knights patrolling. The archers are always ready to launch a long-distance volley of deadly arrows on anyone approaching who looks dangerous. Inside, the king of the castle and the land, is living in ‘security’, protected by the water and walls and strong men.


There is nothing wrong with this image of a well-protected castle, and in many ways, it is a good metaphor for goals about money. Life can be a little like a war sometimes and unexpected guests or enemies like illness, loss of a job, a natural disaster, accident, or any of the other possible misfortunes can constitute a huge attack on our finances and hence cause bad effects throughout our life. Protecting ourselves against this kind of attack does require a stronghold.
To borrow the metaphor of the three little pigs for a moment, the pig who builds the house of straw doesn’t do so well when the wolf appears. It is the pig who builds the house of bricks that survives the attack and lives to tell the tale. And if a house of bricks is good, then surely a castle is an even more secure form of protection.

In real terms, a castle can be translated into things like good savings, long-term investments, a good support network of friends and family, and sources of passive income. Maintaining the castle requires a certain amount of everyday work such as cleaning the moat, checking the arrows, feeding the guards, and checking the stock of weapons and food.
So if the metaphor of the castle is so good at understanding the notion of “financial security”, why were my shoulders sending a negative message and implying that it caused stress?
When I thought about it in terms of the metaphor, I realized that while the metaphor of the castle works for me to represent security, it also suggested to me that the king was cut off from the land and the people. Its purpose was purely to ‘secure’ the king and perhaps this security became a prison to the king.
Like many metaphors that we use, it is not that the metaphor is wrong or intrinsically unsuitable. Rather, the metaphor is not complete or developed sufficiently to allow it to act a powerful symbol. What would happen if I developed this metaphor of the castle – how could that improve both my attitude and my actions towards the important issue of long-term money management?
To start with, what is the role of the king?
To me, the king is not a cloistered-away ruler, but rather an active participant in the going-ons of the land. The king is free to move out from the castle to monitor and take part in the affairs of the realm without fear. The only way to be sure that the king is always safe in such a role is to make the land a safe land. Of course, it is impossible to guarantee 100% safety (just as it is impossible to guarantee 100% security in the world of money), but there are things that the king can do to help raise the safety of the land.
For example, he can educate the people (i.e. continue to learn about money management and help people around him to also learn about it), provide a solid police and court system so that people understand justice will be served to those who break the law (i.e. set up clear boundaries about savings, spending, and investment; and set up internal psychological practices such as self-hypnosis or affirmations to ensure that long-term limiting beliefs are removed, changed, or at least minimized), or improve communication with the people to show that he has everyone’s best interests at hearts (i.e. examine every area of life using a tool like the wheel of life to identify how better money management actually supports everything else).
These are just three examples of how the king can begin to take a more active life in the realm while still being able to have a high level of security. Already, this metaphoric exploration has set off ideas for better money management in this parallel world of reality. As always, stepping out of the cognitive mind of words and into the symbolic system of metaphors and images allows us to gain a fresh perspective.
If you have an interesting metaphor for money management in your life, please share in the comments!